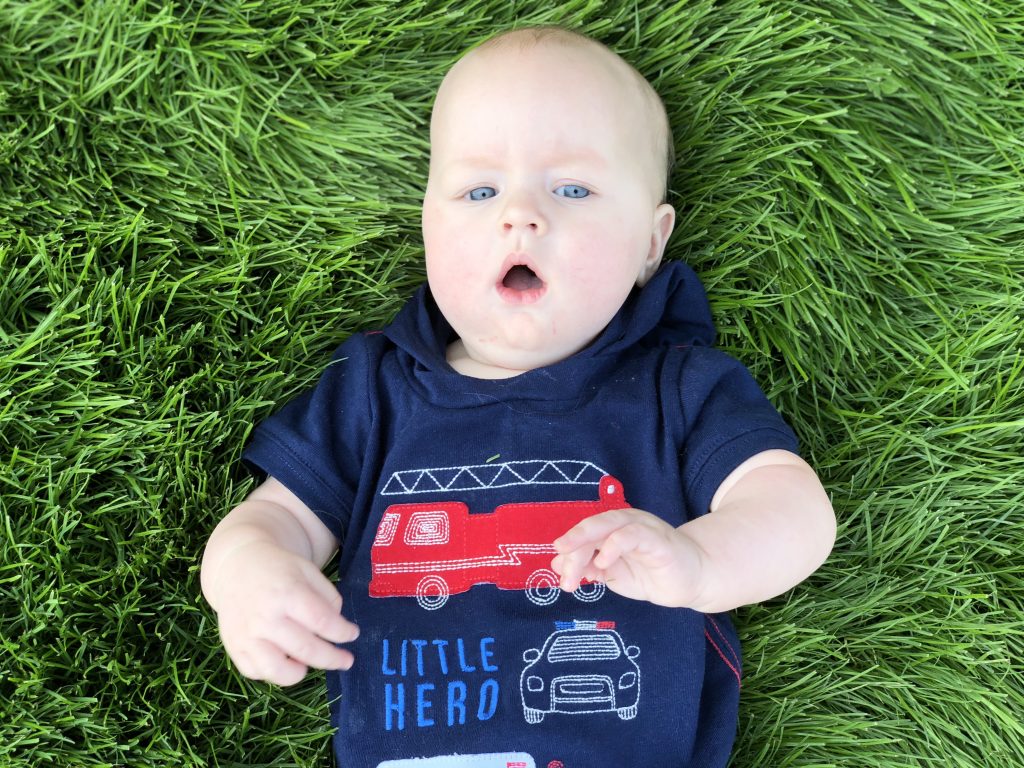 Yes, it’s been way too long since I posted an update on Charlie! Sorry about that. I’ve just been super busy with work over the last 3 months since we got back from the hospital and haven’t had much time to blog. But thought I’d bring you all up to speed today.

Since my last post on June 4th, Charlie has continued to do well and make good progress at home. He’s still eating through the G-Tube and he’s still not swallowing yet on his own so we continue to suction his secretions out of his mouth.

But he has started to stick his tongue out more and close his mouth more, which is a good sign that things are developing more in his jaw /mouth area. He’s also starting to smile a little more than before, which of course we love to see! But that’s also a good sign that his jaw muscles are getting stronger since his surgery. Here’s a good pic we captured of one of his rare smiles: 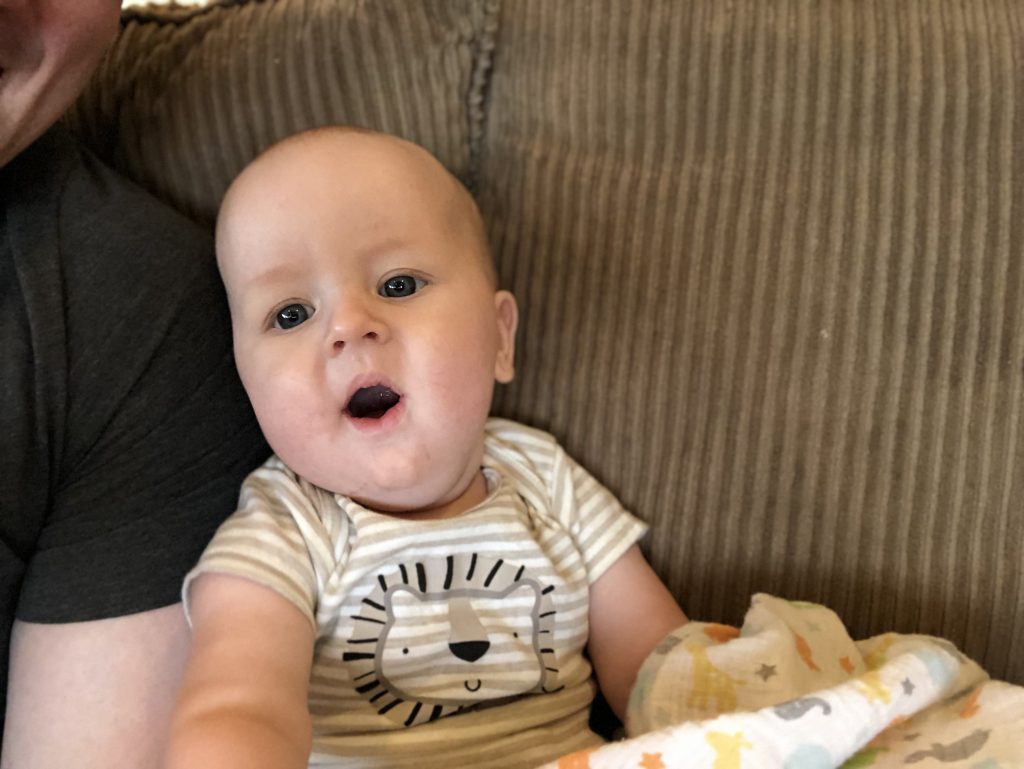 Since he doesn’t smile or laugh a lot yet we always freak out when we see him do either! And Benji is actually the best one at getting him to smile, and who can blame him. It’s hard not to smile when you look at this kid: 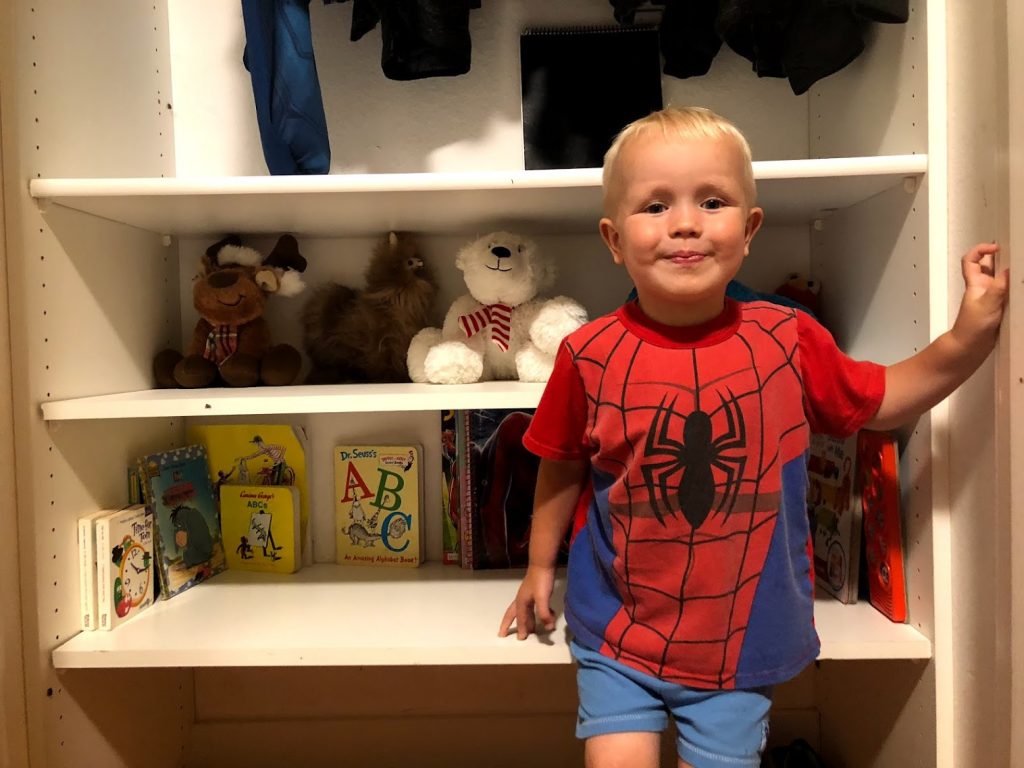 Benji proud of his clean closet he organized himself.

A few weeks ago I scheduled a follow up visit with Dr. Patel, the surgeon who performed Charlie’s operation. Originally we were scheduled to see him in a couple months but I wanted to get in earlier. I just wanted to rule out the possibility of any nerve damage or anything related to the surgery since Charlie’s mouth’s resting position is still open.

So we took him in and Dr. Patel examined him and said it does not look like there’s any nerve damage since Charlie can close his mouth, even though he doesn’t do it a lot. He also said that in cases like this it just takes time for the baby to develop stronger muscles. He didn’t recommend any other scans or anything. He said, it’s just one of those things where you have to give it time. But I was glad that we went just to rule that out. 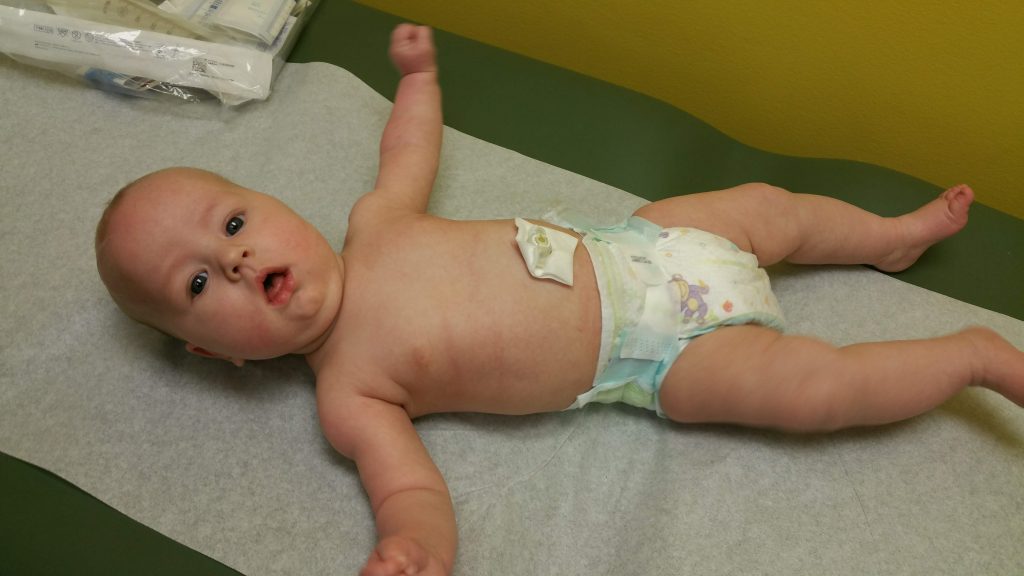 Charlie getting his G-Tube switched out. 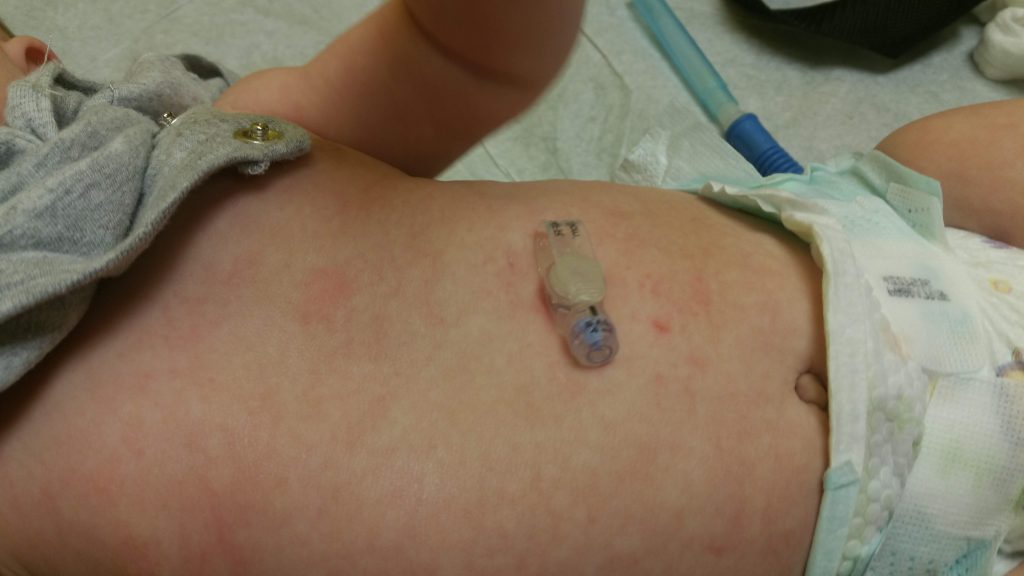 He got a mini one and it even glows in the dark!

Sometime in the last few months (don’t ask me when!), we took Charlie in to get his G-tube replaced with a mini one (shown above). It was a pretty quick process which only took like 15 minutes to switch out. And now he’s got the cool G-Tube! 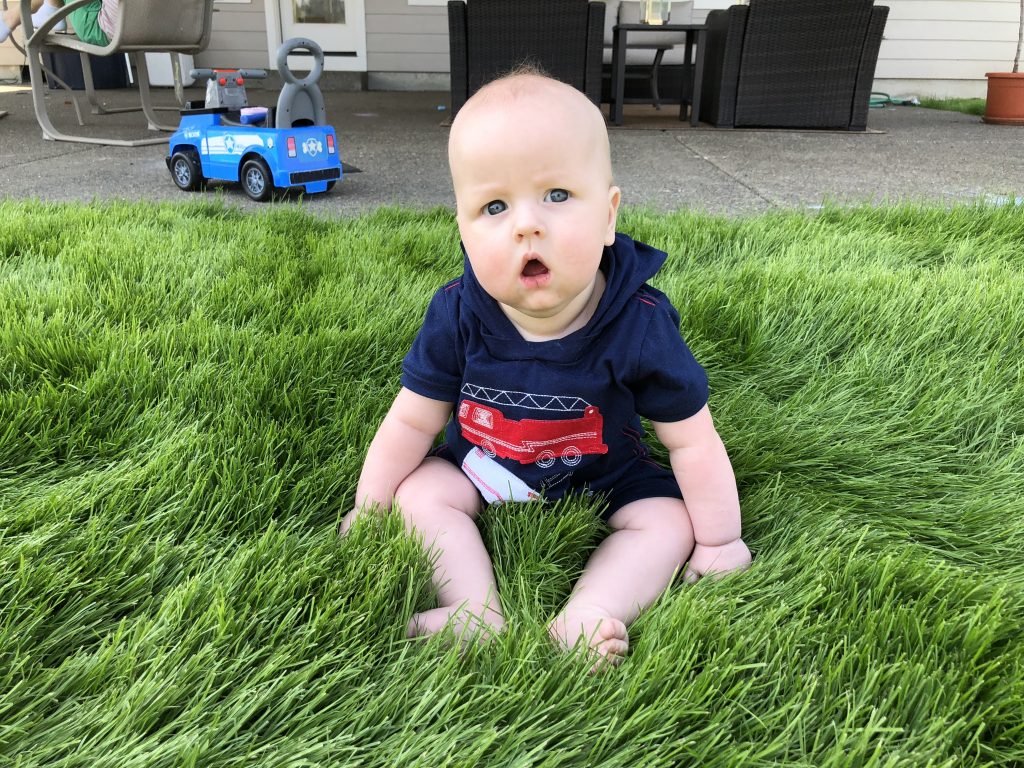 Last Sunday, August 19th, we took Charlie on his first outing that was NOT to a hospital! We went to Rocky and Harmony’s house, which is only 10 minutes away so he didn’t have to be in the car for a long time. And he did great!

We hung out there for probably 6 or 7 hours and it was not as hard being at someone else’s house as we thought it might be. We of course took his portable suction machine and portable feeding setup and he was all set.

I sat him out on Rocky and Harmony’s new lawn they just got, which is super soft and nice, so it was a perfect place for him to practice sitting up on his own. Only a couple times did he topple over like this: 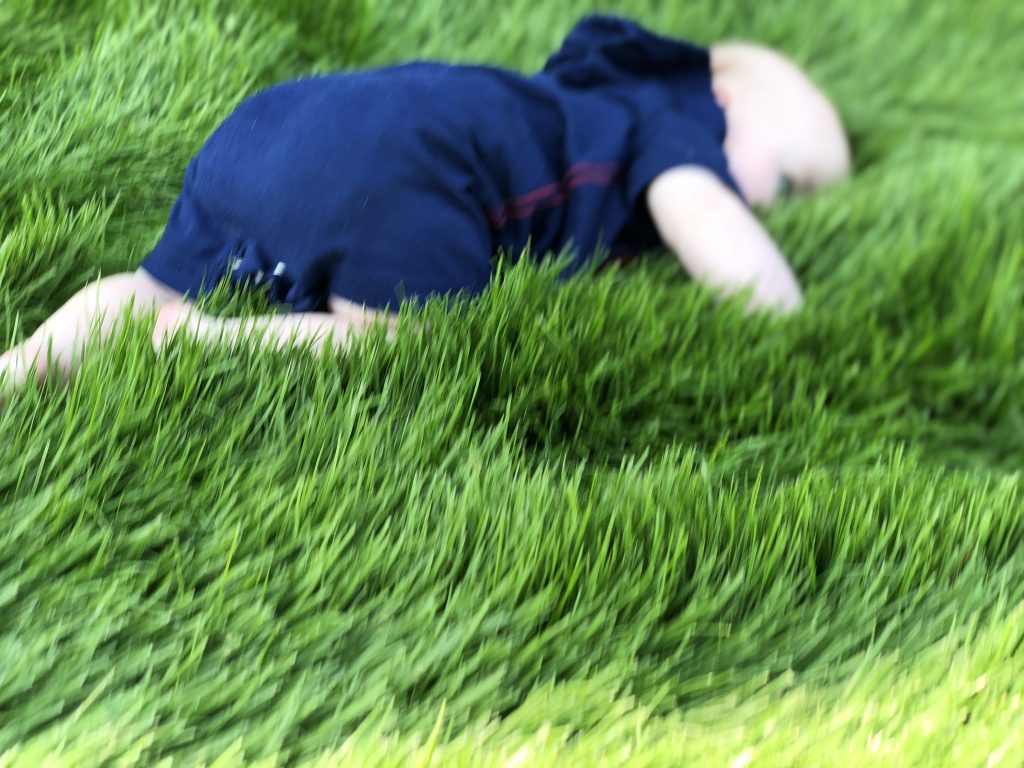 Oops, there goes the baby!

And then two nights ago we went up to Lacie’s parents for Pizza Friday. They live about 20 minutes away, so I guess we’re slowly expanding the distance we’re willing to take Charlie for social outings! We’ve taken him further to his doctor appointments but these have been the first outings to friends or family houses.

So it felt good to get him out of the house and also to show him that cars go other places besides hospitals! 🙂 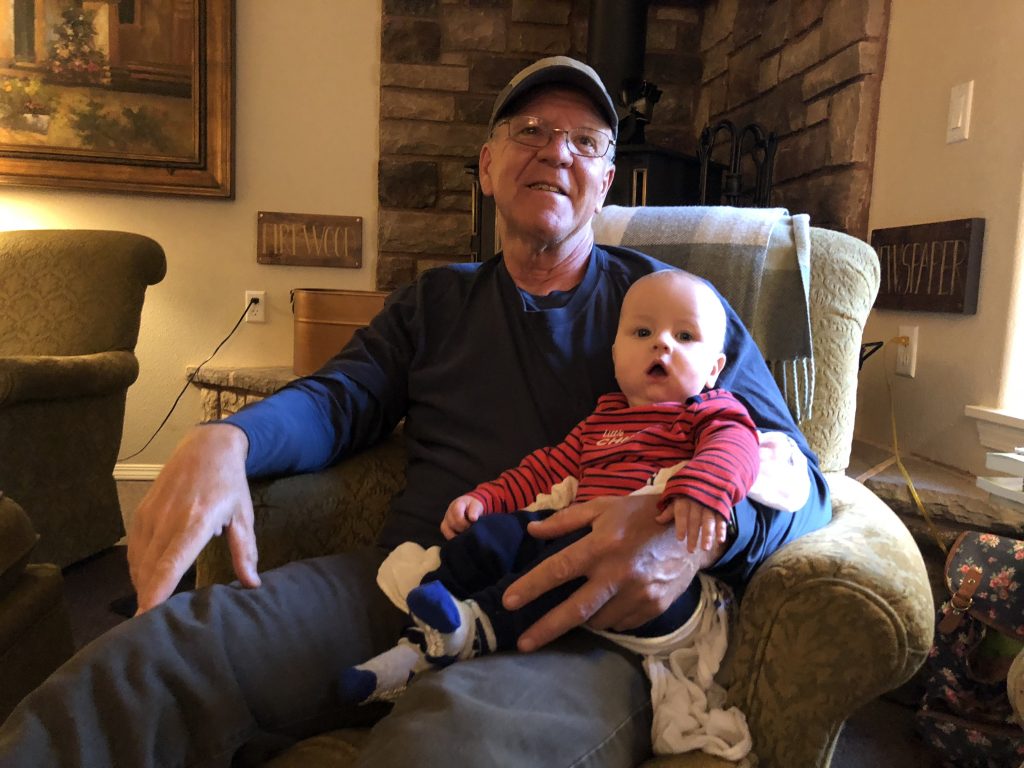 Prayer Requests: You can continue to pray for Charlie to make progress with closing his mouth and swallowing. I know he’ll be ok and he’ll get there. I just don’t know when. But of course we’d like to see it happen sooner rather than later for little Charlie. So if you think about it, that would be our prayer request for him at this time. Thanks!