Day 20 in RV: Lily Gets 6 Stitches and Our Delay 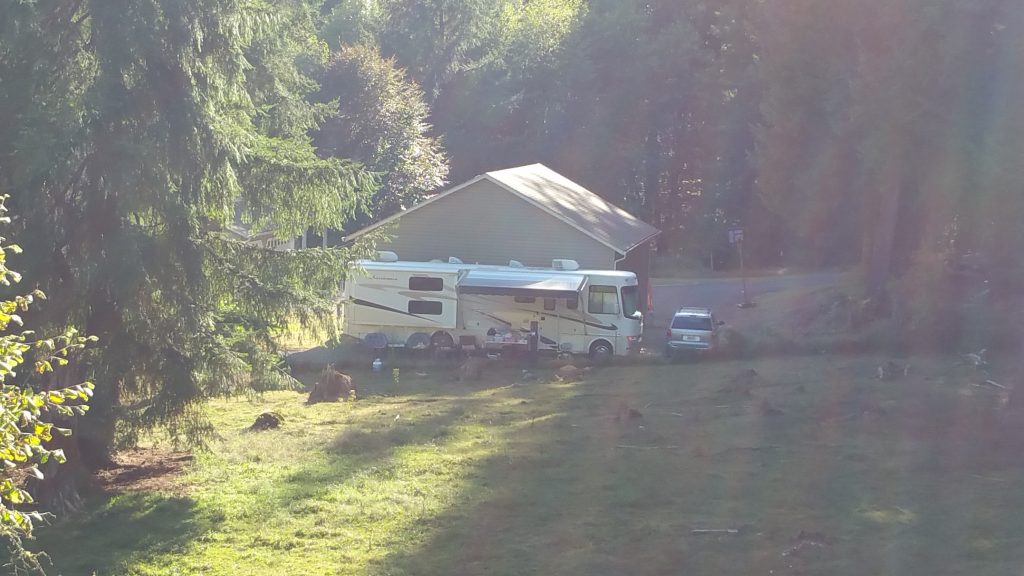 Pic of our campsite from the hill I climbed.

We’re on Day #20 of living in motorhome (if you missed our last post about how we purged our stuff and moved into the RV you can read it here).

First, let me share with you where we are… after 20 days we’ve made it all the way to Yacolt, WA (for all you non-locals, Yacolt is only 45 minutes from where we were living (see photo and map below).

We were going to head out around August 7th but we kept going back and forth on whether we needed to buy a tow vehicle or not (right now we just have our minivan, which isn’t setup to tow).

So we looked at a couple cars to possibly do a trade with. One was a PT Cruiser (which I think are super ugly by the way) and the other was a Ford Explorer. We also considered buying a tow dolly for our minivan.

In the end we decided we’ll just drive separately like we’ve done before on our trips. People say we’re crazy to do that (but they also say living in an RV with 3 kids for 3 months is crazy… so whatever).

But we’ve decided this is what we want to do because the kids actually do better on the road when they’re in the minivan.

Plus it’s kind of nice to have a smaller vehicle to “scout” things out when we’re traveling. And it’s nice to have Lacie make room for me when I’m trying to merge into a lane or make a turn. Divide and conquer, right?

After this we were ready to head out. But then we… ok it was me… got sidetracked again. Here’s what happened…

I was researching conferences I may want to attend while traveling the country and found out the World Domination Summit was happening the next day right here in Portland!

I got excited because the organizer of WDS, Chris Guillebeau, had a major influence on me when I was trying to decide if I should quit my job as an insurance agent to become a freelancer.

I guess I felt it would be fitting because 5 years after making that switch I’m now able to take a 3-month RV trip with my family because of my ability to make a living freelancing.  So I went to experience WDS; and that ended on 8/13/16.

The next day, 8/14 we decided to finally hit the road!

Lily Cuts Her Foot and Gets 6 Stitches!

We did some research on RV parks in Tri-Cities and decided that’d be our first stop. We booked a week at Columbia Sun RV Resort and started packing up and planned to head out Sunday afternoon.

But about an hour before we were to leave Lily got hurt!

She was pretending to make lemonade with these empty mason jars and dropped one in front of her on the driveway. I was nearby but couldn’t see her (she was on the other side of the minivan)… I just heard the sound of glass breaking and Loretta scream, “DON’T MOVE!! DON’T MOVE!!”

I ran over and got to her right after Loretta did but she had already stepped on the glass. I looked and saw the cut was deep and long. I told Loretta to clean up the glass and I ran Lily up to the bathtub with Lacie to rinse it out. We looked and saw how deep it was and knew we needed to get help!

We grabbed a dishtowel and I applied pressure as I quickly put her in the carseat. Lacie jumped in the driver seat and we sped out and headed toward town. I sat on the floor of the minivan in front of Lily holding the towel to stop the bleeding.

Lily: when you read this when you’re older I want you know that you were one tough kid! You cried for a little bit but after a few minutes in the car you just did that thing with your lip where it looks like you’re sucking it up and trying not to cry. I felt so bad for you but was also proud of how good you handled it!

We didn’t know if we should go to Urgent Care or the Emergency Room. So we tried calling Lacie’s grandma but no answer. Then tried calling Lacie’s Aunt Pita. She was at a wedding on the way to where we were going so we decided to stop real quick and have her look at it since she used to be an EMT.

We stopped and Pita took a look and said that we should skip Urgent Care and head straight to the ER, which we did.

We spent a couple hours waiting at the ER before they could see her. Finally the doctor came in and gave her stitches. 6 of them. That was the worst part. Lacie and I had to hold her down while she screamed and cried. It was the longest 15 minutes of my life! 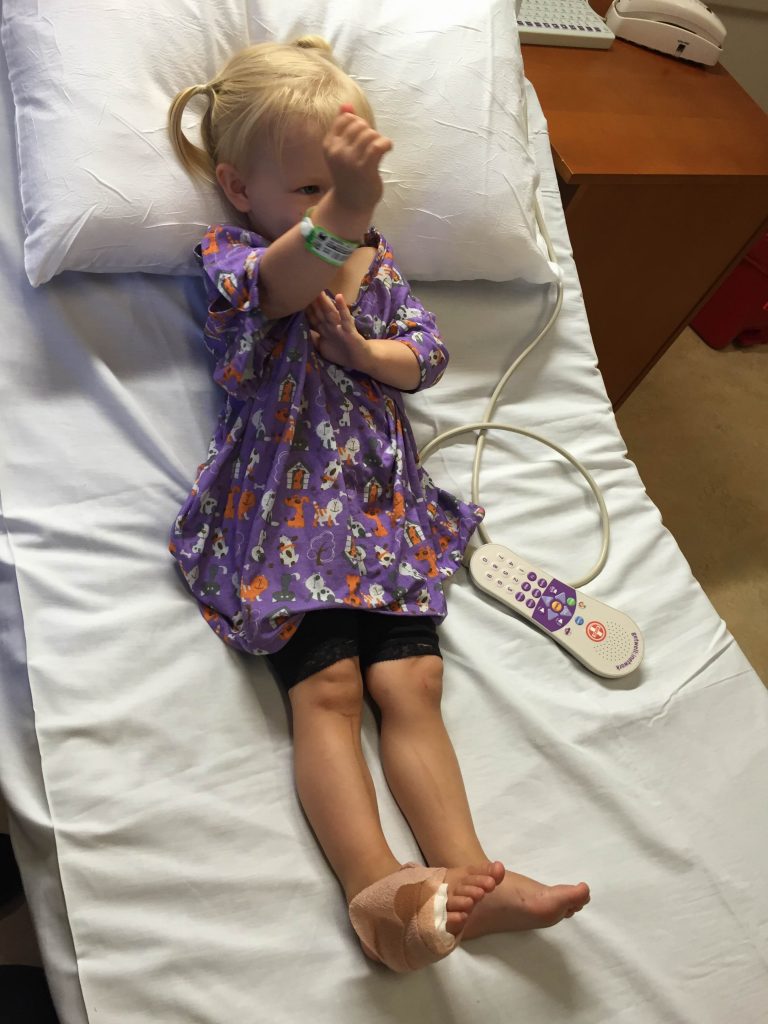 Lily waiting to get her stitches. 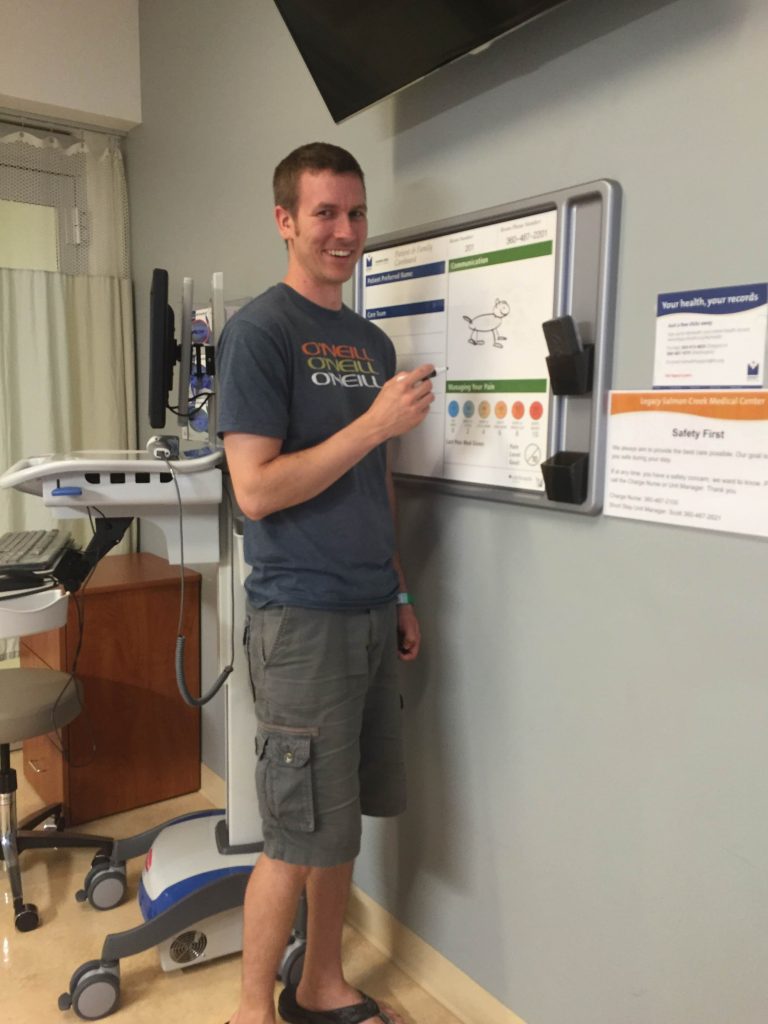 Josh Failing at Drawing a Dog to Entertain Lily 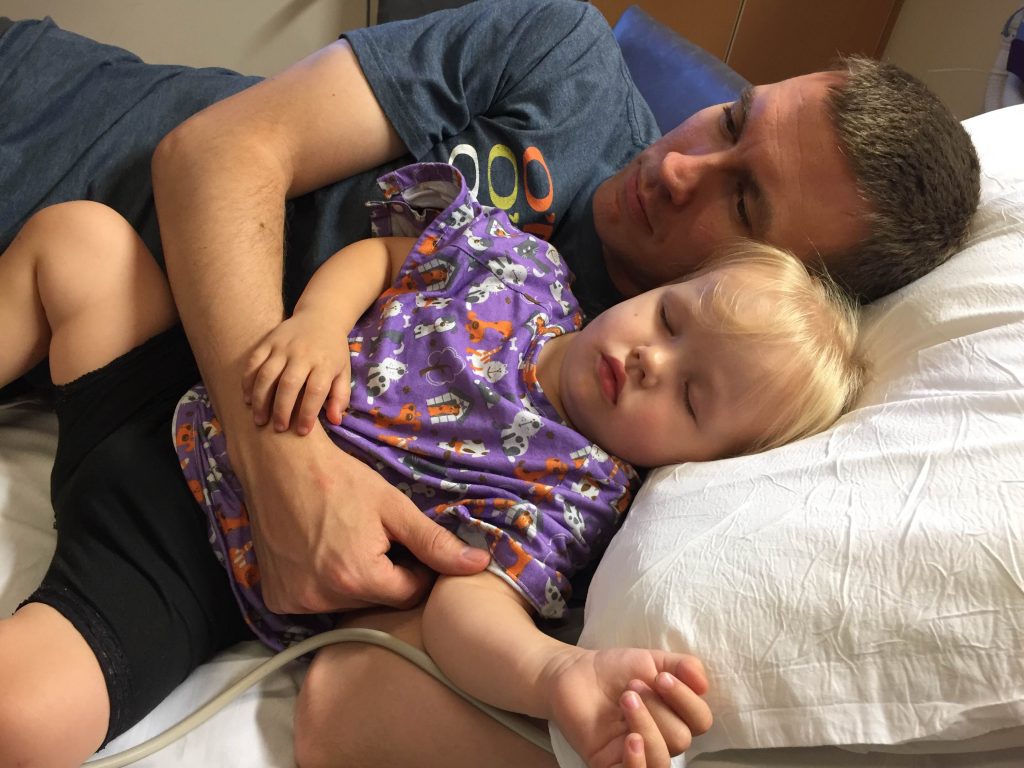 Lily finally fell asleep waiting. Only to wake up to getting stitched!

But again, about 5 minutes after the last stitch was in Lily settled down and stopped crying. She just said, “I want to go to Ginny House Day’s House” (for those who don’t know that’s Grandma’s house and “Ginny” is her favorite).

Afterward we went through McDonalds drive thru and got her whatever she wanted! 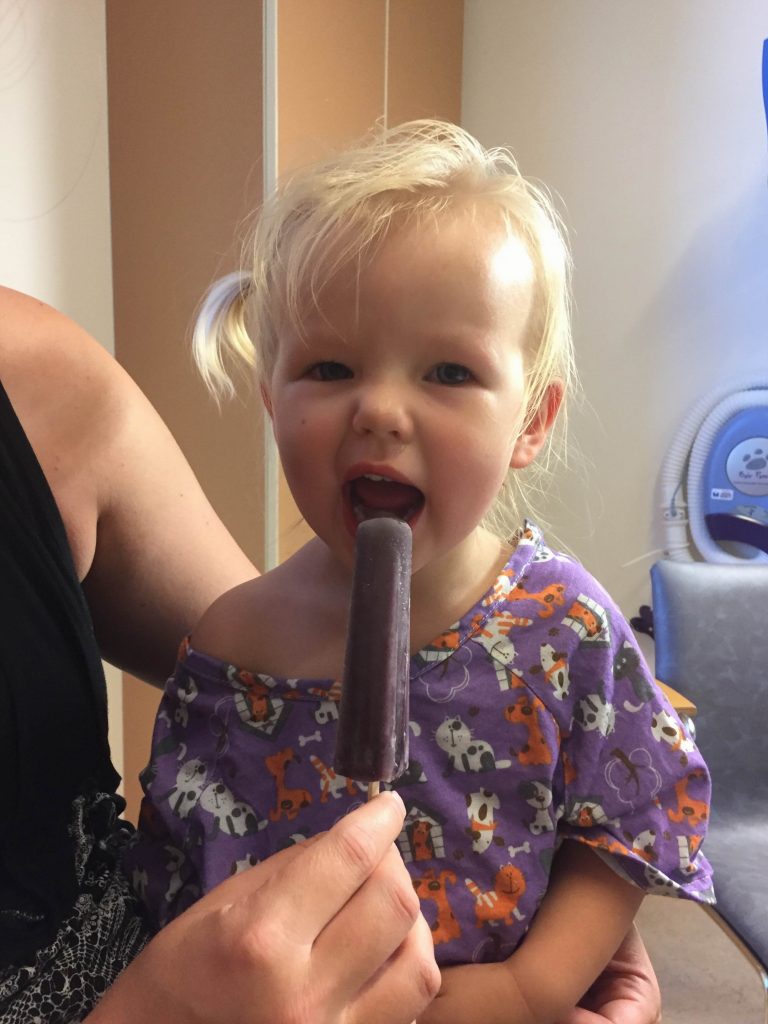 They asked what color popsicle she wanted. She said, “purple.”

Plan to Head to San Diego After Stitches Out

So since Lily can’t walk for a while we decided to stay put and wait until after her foot heals before leaving.

At some point during all this craziness Lacie had got a call from her brother Logan and found out that they were getting closer to moving into their 5th Wheel in San Diego. We found out there was a spot available there and decided we would head there once Lily is better.

Logan and his wife Danielle will be there after 9/1 so our new plan is to head there right after Labor Day.

For now we have a good spot up here in Yacolt at Lacie’s parents house. It’s actually pretty nice. We have full hookups (electric, water and sewer). And we have a beautiful view out our front door. Plus, the kids get to see Ginny, Grandpa and Auntie Cailee each day.  So the delay isn’t too bad. 🙂 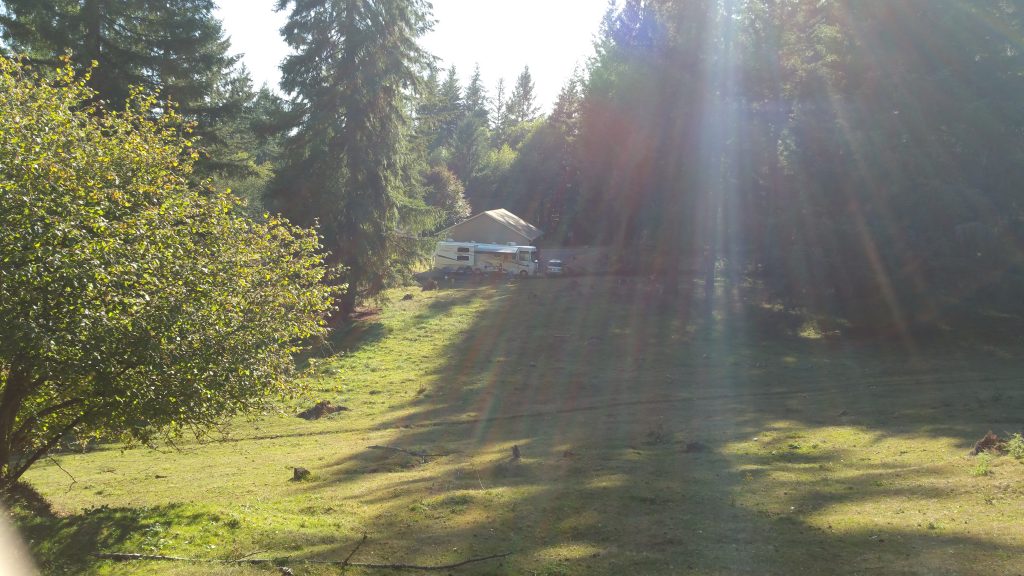 Photo of our spot from further up on the hill. 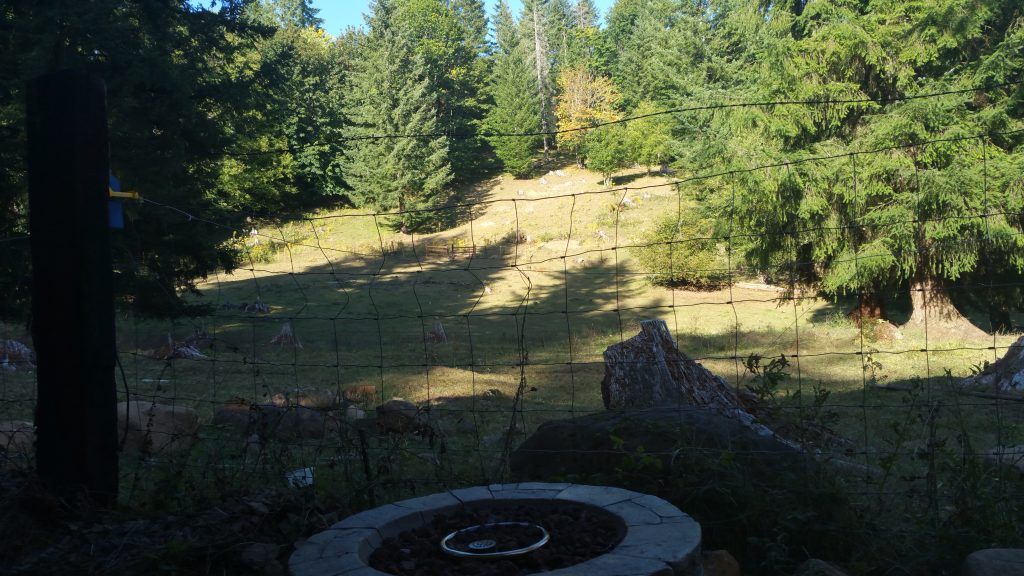 Fire pit and view from our “front porch”